I wasn’t given my due process, cries Fil-Can immigration expert

“In case of dissension, never dare to judge till you’ve heard the other side.”

— Euripides, The Children of Herakles 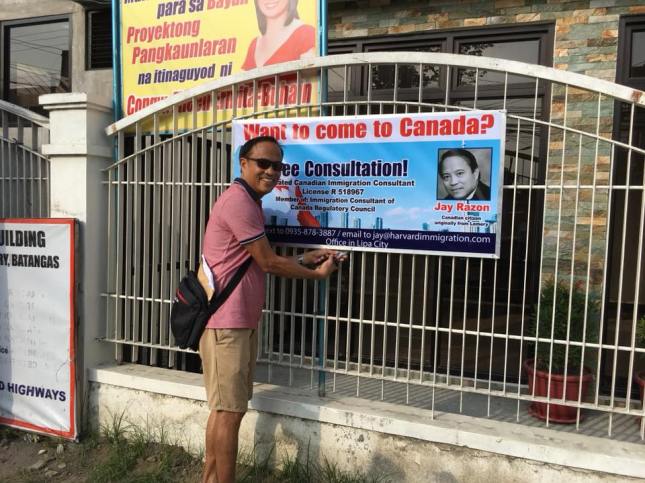 NEW YORK CITY –– A Filipino-Canadian immigration consultant based in Surrey, British Columbia has protested the advisory posted by the Consulate General of the Philippines in Vancouver, Canada on its website on July 30, 2018 saying he was “unfairly targeted and singled out without any due process.”

The advisory, authorized by the Philippine Overseas Labor

Office (POLO) with office at World Trade Center, Canada Place in Vancouver, Canada, said, “The Philippine Consulate General (PCG) in Vancouver advises the general public about the unauthorized and unlicensed recruitment of Filipino workers being conducted by ‘Harvard Immigration.’”

“It was so sudden and so quick,” sobbed Jay Razon, owner of Harvard Immigration. “There was no warning whatsoever and I was not given a chance to air my side.”

The advisory added: “Based on the verification made by the Philippine Overseas Labor Office (“POLO”) in Vancouver, it was determined that Harvard Immigration is not duly authorized/licensed to recruit Filipino workers for employment in Canada. Filipinos seeking employment in Canada are advised to deal only with legitimate

recruitment/employment agencies that are duly registered and accredited with the

The advisory stressed that “a license to engage in immigration consultancy activities is not an authority to undertake recruitment of Temporary Foreign Workers (“TFW”). It is also prohibited even for a licensed recruitment agency to charge a worker any recruitment fee to facilitate deployment to Canada.”

Razon, 63, said he surmised the advisory came out in the heels of an advertisement in the Surrey-based Philippinze Showiz Today by Lucky Supermarket located on Kings Boulevard in Surrey, which announced the hiring of workers for various positions.

He admitted he had “an outstanding contract” with Lucky Supermarket “to provide immigration services to potential supermarket workers.”

Razon, who obtained a license to operate for Harvard Immigration two years ago,

Clarified that “I was not hired primarily by the company (Lucky Supermarket) to recruit the workers but for immigration services e.g. LMIA application and Work Permit application.”

LMIA is Labour Market Impact Assessment, a document that an employer in Canada may need to get before hiring a foreign worker.

He said his company did not sign any contract with the workers.

The newspaper advertisement “clearly stated that applicants may send their resume directly to the hrsurrey@luckysupermarket.ca.”

“If hired by the company I can now offer my immigration services,” Razon explained.

A nurse and civil engineer by profession, Razon pointed out that “I am a regulated Canadian immigration consultant (RCIC) but not a licensed worker recruiter here in Canada nor in the Philippines. I am just not allowed to recruit workers.”

Upon the suggestions of Joel Castillo, president of the United Filipino-Canadian Association of BC (UFCABC), Razon said he tried to link with Maria Facundo-Lilly, owner of the Vancouver-based Reliable Nanny and Caregiver Placement Agency, “in order to get suggestions on how to abide with the law.”

Razon said he wanted to explain this to Labor Attaché Margarita Eugenia Victorino but she reportedly threatened to file a case against him.

POLO has issued a “cease and desist” order for his company thus “my momentum (as an immigration consultant) to help the more than 150 Filipino workers has ran out,” he protested.

“I could lose my license as a consequence of this issue, but I want to emphasize that I  am only helping the Filipino workers and I have worked so hard to obtain my license,” Razon bewailed.